If you haven’t already, you must check out Kate’s new artwork.
She has made some beautiful pillows. She made cute Kitty pins and Flower pins to wear on coats or…. on hats or handbags … you name it!
She has made some adorable baby quilts and greeting cards.
Her greeting card collection includes Valentine selections and others for general use.
Her latest idea is “an Owl Art card a day”. She creates the card, names the Owl, and composes a story to go with that particular Owl! We are only into the second day of Owl week! So check it out! It is a fun site to see. (pun intended. 🙂 ) 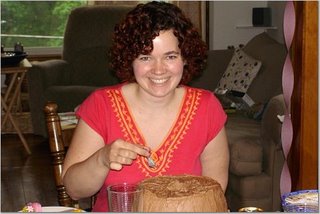 I wasn’t really happy with the Post for Uncle Walt’s birthday. I was trying to tell the story with pictures and was unable to upload the ones I wanted to use. So let me try again, here.

Walt’s daughter-in-law, Carol, organized the Covell clan in RI, Bolton, and East Haddam into party mode. From Janet’s cake, to Jan’s centerpieces, to Kim’s guest book, to Chris’s place cards, to Gram’s chocolate chip cookies and punch, and my balloon addition the entire event went smoothly. On Friday while Chris, Kim, Kate and I baked some tasty treats, the Covells set up the hall at the church so that Saturday morning it was ready for the dazzel to come. 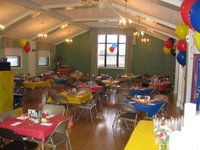 Alex and Carol provided the food and refreshemnts and Carol was on top of the food presentation. Everything was lovely!
Alex and Carol put together a video history that spanned Walt’s life from Sowams Road to now. Christopher and Alex did the narration. It was very impressive and included a clip from a movie where Walt’s father [my Gramps] played his father. So my kids, and my neices and nephew were able to see their great grandfather! Alex and Carol also invited someone to play the piano and someone to sing several of the songs Walt sang as the male lead in the musicals put on by the Barrington Players in the 50’s and 60’s. 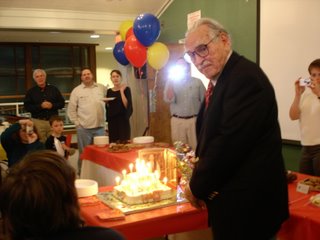 The guests were very enthusiastic in their appreciation of the entire event. They loved it! 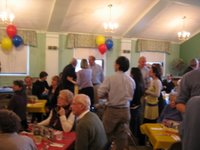 Chanel 6 news arrived to gather some footage to air later in the week.

Walt’s grand children and his great grandson, Kyle were on hand for the fabulous event. 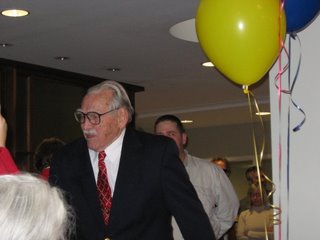 Our dear Uncle Walter celebreated his 90th birthday on January 6, 2007.
Janet baked a most beautiful cake for the event. 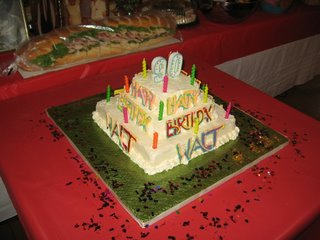 Kim and Anne were in charge of the guest book. 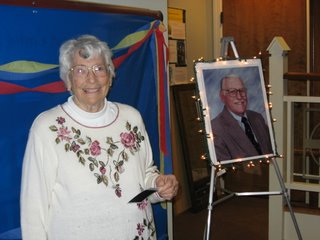 Here, Gram poses in front of the backdrop we used to photograph each guest. The guest then took his or her photo to the guest book pasted in their photo and signed the book. Fun!

Walt was surprised. But then, he is an actor so………? 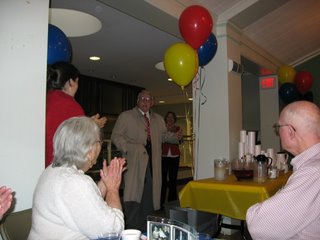 90 guests were in attendance. Here, Walt greated his co-stars from the “Clue” video game
series. 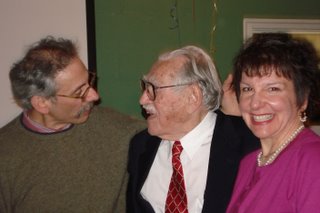 Cory and Leah stoled the show in the presentation video of Walt’s career made by Alex.
There was a clip of Uncle Walt reading to Leah and Cory when they were 3 and 2. I guess it proves the old addage never get on stage with a pet or a little kid, you will be up staged!

Oh Dear! Blogger just won’t let me add more photos! I’ll have to continue on another page… or day!

Our Christmas /Birthday visit to The Dobelsteins’ was a fun filled visit for Gramps and Grammie Cass. 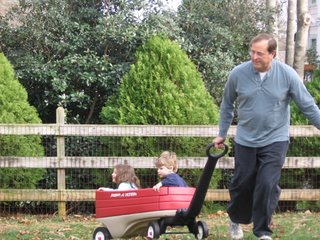 From wagon rides in the yard to stories on the couch, fun was had by all. 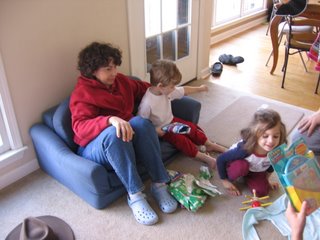 The only complaint was that the visit was too short.

Christmas was busy and not like any other!
We traveled to Vermont, North Carolina, and Georgia.
The weather was great for driving and we visited with wonderful folks at each stop. 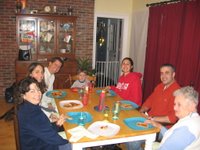 On Friday afternoon we packed up Gram Lund and our gifts for the Lagrows and headed to VT for an overnight. Tina cooked us a beautiful roast of beef for dinner on Saturday. We headed home with full bellies! 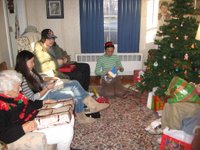 Paul and Janet brought their ‘chillin’, Jan and Milt brought theirs.
Kim arrived and Chris hitched a ride with us. Anne, Kate and Patrick were missing. But it was the closest to having all the Barrett grandkids together in a long time.

Then back to Portsmouth 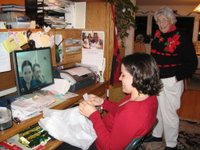 Kate and Patrick joined us via phone/web cam. It was strange but comforting to know they were right there with us! 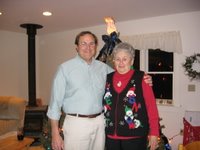 Bill’s Mom was on hand to help us celebrate. 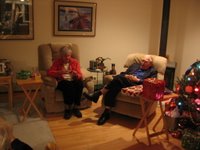 Walt and Nancy joined us for dinner then off to sing in the choir at St. John’s.

What the heck, one more! 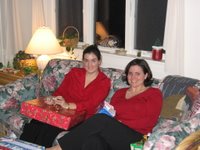 Anne was in Michigan with her family this Christmas Eve.
Chris and Kim share the couch.
Hmmmmmm
Blogger won’t up load any more of my photos.
Well, I’ll try again later.
Happy 2007 !